Important changes of this version:

Resource leveling is an important step in project management. The easier this process is done the more productive you are. During the control phase of a project many unpredicted events can occur that can influence the initial project plan. Hence certain tasks are delayed or are going to take a longer period of time to be completed. Once that happened all the resources that where assigned on those tasks will have a different working plan. They may or may not be able to work on that given plan either because they are not available on that period or because they were already assigned on other tasks.

The solution to all these problems is called resource leveling. It is a mechanism through which the project manager will solve the overallocation or unavailability of resources. Some fast and easy solutions are: moving overlapping tasks, assigning other resources on tasks that overlap, changing working calendars on resources and tasks. All these actions are easy to be performed with the help of a project management software that will show you at the same time the resources work and the task scheduling plan. This way the manager can easily see which is the best solution to solve the overallocation problem. Version 3.10 of RationalPlan adds this possibility. The users can now see in the same view and synchronized
on the same time scale both the Gantt chart and the Resource sheet. 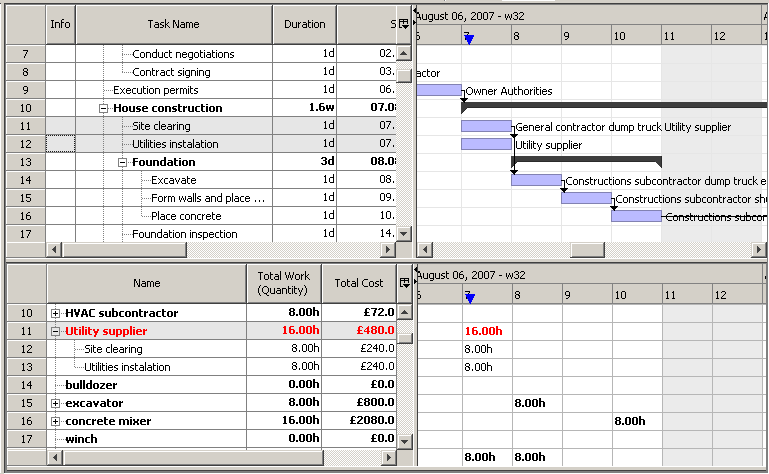 As promised previously Mac users will have a better experience with the release of this version. The application interface is cleaner. Buttons, split bars, tool bar items, color pickers… all have a better look and feel. The opened file icon is now set on the title bar with grayed/darkened colors based on the saving state of the file. The close button’s look also changes according to the state of the file: saved on not. Little things that Mac users are used to find on their applications can now be found on RationalPlan. Even more from now the .xrp file extension is associated with the application. Just double-click or drag a file over the dock icon and it will be opened. .xrp file type association is added starting with this version not only for the Mac version but also for Windows.

Usually project managers plan and control the projects from start to end and make the necessary changes. However, there are some other people (like stakeholders) that have to check and overview the projects’ evolution into their smallest detail. In this aim was developed RationalPlan Project Viewer that can be freely distributed. Still certain details of a project are preffered not to be made public. For example the clients and the resources that are working on a project would like to see how the project is evolving but the manager and the developer of the project would not want to make public the working rates or other costs… That is why a privacy export would be welcomed. Starting with this version RationalPlan users can create such filtered files that can be shared with any stakeholder. All they have to do is to select the information that they want to keep private and then export it.

Older MS Project .mpx files can now be imported in RationalPlan. This completes the list of file formats generated by Microsoft Project that can be imported.

Since over time the product has become more and more complex, toolbars have increased in size making the work with them more difficult for users. Hence it appeared the need of tool bar configuration. Now it is possible to show/hide certain actions or buttons from the toolbar based on the actual needs of each user.

RationalPlan is designed as an affordable alternative to Microsoft Project with some extra-features like multiproject management and it is covering project management area from WBS construction, project planning and scheduling to critical path management, over allocated resources detection, progress tracking, cost estimation, etc. Gantt chart support as well as various time line reports are also provided. It offers the most important capabilities of a good project management software while being able to operate on various platforms starting with Windows, Mac, Linux and all other Java enabled platforms.

About Stand By Soft

Stand By Soft was founded in 1997 as a software company specialized in building desktop applications and components. RationalPlan is a project management software that follows the general recommended guidelines from project management domain. MOOS Project viewer is a Microsoft Project viewer that allows you to open, view in a dynamic way and print any Microsoft Project file.